Along with Haeinsa Temple in Hapcheon and Tongdosa Temple in Yangsan,
it is one of three Yeongnam temples. In addition, it serves as one of Korea’s Buddhism centers. 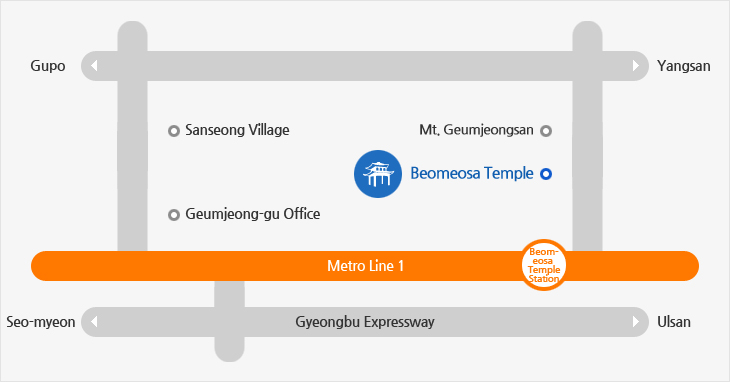 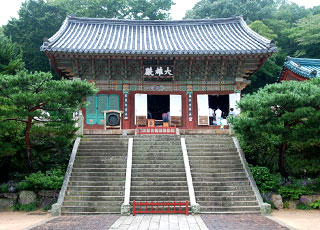 In contrast with the general Daeungjeon Hall where only a Shakyamuni Buddha statue is enshrined, a Shakyamuni Buddha statue is flanked by the statues of Maitreya Bodhisattva and Galla Bodhisattv in Daeungjeon Hall of Beomeosa Temple. This hall was burned down during the Japanese invasion called the Imjin War. It was restored in the 35th year of King Seonjo of Joseon in 1602 and remodeled once in the 5th year of Gwanghaegun of Joseon in 1613.
The front and side walls each are sectioned into three bays. Its roof is garbled looking like a Chinese character “人 (man)” viewed from side. It is dapo style architecture with multiple interlocking bracket clusters to support a set of three purlins on the interior and exterior of the building. The Buddhist altar and the roof-shaped sculpture to decorate the Buddha statues are delicate and sophisticated enough to show both the beauty of Buddhist architecture in the mid-Joseon period and the excellence of wooden craftwork in the entire period of Joseon. 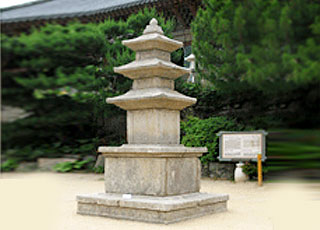 This stone pagoda stands in front of Daeungjeon Hall of Beomeosa Temple. It is composed of a two-layered platform and a three-story main body.
It is decorated with the "panel design", each side of which bears elephant’s eye engravings rather than the usual pillar-shaped carvings. The second and third stories are disproportionately small compared to the first story. The roofs rest on rather thin and flat four-tiered cornices and the eaves are horizontal, all of which reflect the unique style of late United Silla masonry. The only remaining part of the pagoda's finial is a lotus-shape ornament called boju on a rectangular pedestal that supported the head ornament.
This three-story stone pagoda was built during the reign of King Heungdeok of United Silla (826-836). When it was repaired during the Japanese occupation of Korea, its base part became too tall and large because one stone was added to the lower platform. The stone railing was also provided at that time. 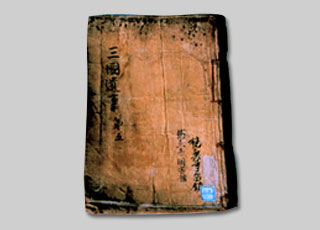 This book does not have the prologue and the epilogue but is considered the same edition as the complete set possessed by Kyujanggak of Seoul National University. According to the records of the epilogue of the Samguk Yusa held by Kyujanggak, this book was revised in Gyeongju in 1515 (the 7th year of King Jungjong). Samguk Yusa is the historical records of Goguryeo, Silla, and Baekje compiled by the Buddhist monk and All-Enlightened National Preceptor Il Yeon during the reign of King Chungryeol of Goryeo. It covers not only the history of Three Kingdoms but also the history of Dangun Joseon, Gija Joseon, Wiman Joseon, the Samhan, Hubaekje, Balhae, and Garakguk (Geumgwan Gaya).
Considering that the volumes 4 and 5 of Samguk Yusa possessed by Beomeosa Temple have some complemented parts, they seem to have been published in the 7th year of King Jungjong.
However, they are deemed invaluable materials in the light of the bibliography and cultural property considering that one of them is designated as a treasure.The form of printed books published in the 3rd year of King Taejo can be examined.They were revised before the Imjin War and are extant and well-preserved rare printed books today. 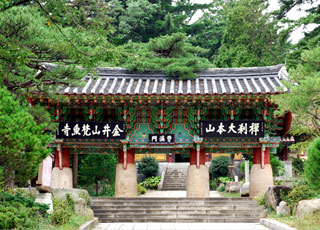 As Iljumun Gate, Jogyemun Gate is the first gate people see and should pass through to enter the precincts of a shrine.
In general, four pillars were built at the four corners to stabilize a building, but the pillars of Jogyemun Gate stand abreast, so it is also called "One-Pillar Gate".
The exact construction date of Jogyemun Gate of Beomeosa Temple is unknown, but it is presumed to have been built in 1614 (the 6th year of the reign of King Gwanghaegun of the Joseon Dynasty) when Myojeon, the Buddhist priest in charge of the temple, initiated the repair and restoration of other temple halls.
The gate was repaired in the 5th year of King Jeongjo (1781) by Baekam Seonsa. The front wall is sectioned into three bays, and the gabled-roof looks like the Chinese character for person (人).
Brackets called gongpo that support the weight of roof eaves are placed by means of dapo (multi-bracket system) style, where brackets are placed between the pillars as well as at the heads of the building’s structural pillars.
This gate also features the short wooden pillars that are placed on top of tall foundation stones. All the wooden materials are painted in a variety of colors and designs called dancheong. The gate signifies the Buddhist principle that all laws of the world lead to one path, and is therefore called Sam Haetalmun, the three gateways to emancipation.
Jogyemun Gate of Beomeosa Temple serves as the Iljumun Gate situated at the entrance of the temple. The appropriate layout and structural balance of the gate’s parts and members highlight the visually stabilized construction and aesthetic design of the gate.
This gate can clearly be deemed a masterpiece among other Iljumun Gates, which exemplifies the structural aesthetics of traditional Korean architecture. 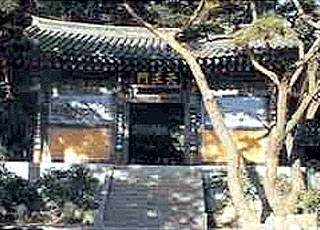 The trees in front of Cheonwangmun stand in harmony with Cheonwangmun. They are believed to prevent evil spirits from entering Beomeosa Temple and thus safeguard this temple. Its branches look as if a dragon were wriggling. 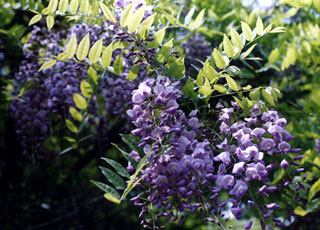 Located in Cheongnyong-dong, Geumjeong-gu, Busan, and with an area of 55,934 square meters, the Wisteria Habitat was designated as Natural Monument No. 176 on January 13th, 1966 because it was considered invaluable ecological research resource. It is a privately owned place. Wisteria vines usually climb by twining their stems over other trees’ stems, which end up killing the trees. These vines also feature many hairs. There are rocks taller than any human across the stream flowing next to Beomeosa Temple. Wisteria vines have been thriving on these rocks forming a large colony. Tall trees such as pines and hackberries barely grow between the vines.
It is rare that Wisteria vines grow in groups, so this site is called Deungungok and is recognized as one of the scenic views of Mt. Geumjeongsan. It is estimated that approximately 500 vines grow together and the oldest one has lived for 100 years.

About the origin of the name Beomeosa, Dong'guk Yeoji Seungram says,“Mt. Geumjeongsan is 20ri (8 km) away north of Dongnae-hyeon. There is a three-gil (12 m)-tall rock standing on the ridge of Mt. Geumjeongsan. It has a well on top of it, the circumference of which is about 10 cheok (3.03m) with a depth of 7 chon(approx. 21cm). This well is always full of water even during a draught and shines like gold. People say that a gold-colored fish descended from the sky riding on a five-colored cloud and played in that well. After that, a temple named Beomeosa was built, whose name was derived from the mountain name, ‘Geumsaem’, and a fish from the sky, ‘beomeo’.”